Last week, Jfb shared a post by some Twitter users accusing the management of Peace Mass Transit in connivance with officials of the Nigerian road safety FRSC Kogi state command, of burying  some of their passengers who were involved in a fatal accident in Kogi state in August without the consent of their family members. Read here.

Now, the management of Peace Mass Transit company has released a statement over the issue.

In the statement released on their social media handle, the company said it regrets the unfortunate incident and that the decision to honourably clear the thoroughfare, and inter the remains of deceased victims together, nearby was taken by all the parties at the scene of the accident.

Read the statement below

We at Peace Mass Transit LTD, deeply regret and commiserate with families of victims of the August 16th accident at the Itobe end of the Lokoja-Abuja Road, involving one of our mini-buses.

Eye witness accounts of the unfortunate incident have been consistent, to wit: that a certain Peugeot 406 saloon car, bearing a large gas cylinder and coming from the opposite direction on top speed, while attempting to overtake another vehicle crashed into our bus head-on! The said PMT bus was, and remained on its rightful lane even at the point of the collision.

The resultant impact caused the gas cylinder to explode into a huge conflagration of fire which made it difficult for occupants of both vehicles to be rescued all alive.

Our sincere condolences go to the families of all the deceased passengers who had kept the faith with their preferred road transport service provider-PMT, but fell to the cold hands of death in those circumstances we view as most unfortunate.

It was also regrettable that national Emergency First Responders at the scene of the accident and natives of the area, apparently acting in good conscience, made the decision to honourably clear the thoroughfare, and inter the remains of deceased victims together, nearby. We have since been told on enquiry that the decision on internment was a collective one among the first responders, as a result of the state of the remains.

These same compatriots had also risked their lives to defy raging gas fire to pull out some passengers alive, moving them to hospital for treatment.

The life of every mortal is indeed in the hands of God,and at PMT, no safety consideration or concern is postponed for action for even a second,and the regulatory agencies can bear us out.

The ITOBE episode is the first of its kind in our history, hence, staff at all levels remain in deep, awful shock, even up till this moment.

Given a different scenario and circumstances, on another day, certain impulsive actions allowed on that occasion may have been handled differently, with more regard to peculiar sensibilities. Cultural and religious belief of those around also played a role here, but then, the noble motive and selfless efforts of these patriots that were on ground, could be put in the proper perspective, and appreciated.

We mourn our cherished passengers who were affected to no end, and send our heartfelt condolences to bereaved families. Your loss is our loss!

We place high premium on the welfare and safety of our dear Passengers. Clearly, we are in this situation, together. Please, be comforted.

We have kept in touch with majority of bereaved families and in frantic, committed efforts to reach the others whose contact details are not easily discernible from the travel manifest. This is why this statement is coming out now.

It is clearly a tough period for us at PMT, as we pledge our unwavering commitment to the safety of our travelling public who are the only reason we are in this ever challenging business called transportation.

Spare a thought for us in your prayers; we do, for you, all the time.
May God bless us all, and give all of us the Grace to carry on to His glory. 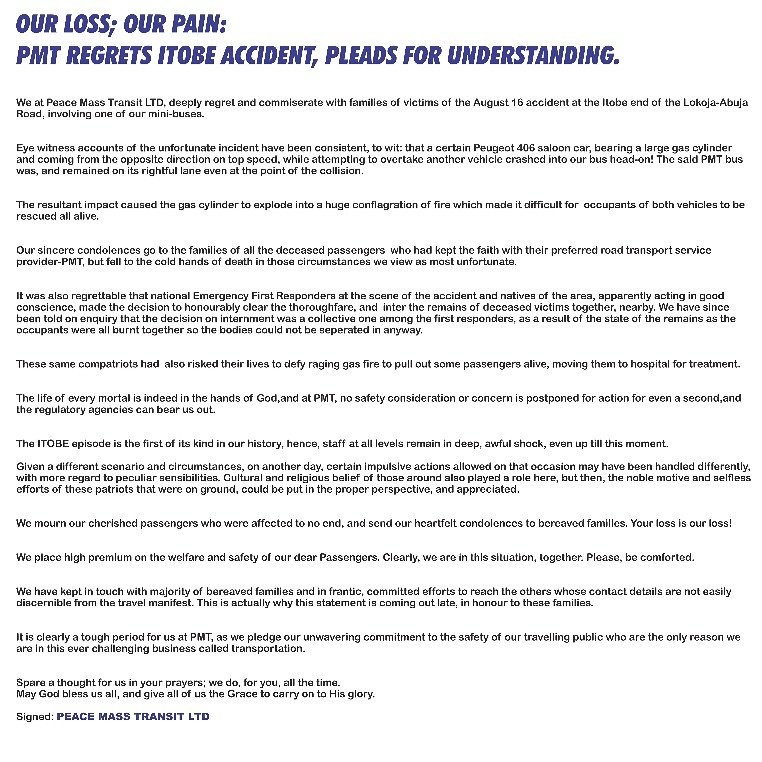 “She looks like a pair of worms mating” Freeze mocks Tope...

Girl kills herself and her son in Delta because her babydaddy...

ABOUT US
I'm Jane Francis, a graduate of University of Ibadan (UI) with BSc in Economics and MSc in Economics from the University of Lagos (UNILAG). I'm quite passionate about Information Technology at large which has made me equip myself with the knowledge of Digital Marketing Media, Customer Services and quite a number of IT specialties. My number one goal in life is to reach-out to people with every online platform i can lay my hands on. And Of-course!! I LOVE TO GIST. :)
Contact us: info@janefblog.com
FOLLOW US
© 2019. JaneFBlog. All Rights Reserved.
MORE STORIES

“She looks like a pair of worms mating” Freeze mocks Tope...

Girl kills herself and her son in Delta because her babydaddy...

Jane Francis - February 20, 2020
0
We use cookies to ensure that we give you the best experience on our website. If you continue to use this site we will assume that you are happy with it.Ok