For sometime Now, self named Pole dancer Cossy Orjiakor has been calling out her former best friend,actress Halima Abubarkar for trying to destroy her years back for allegedly giving out a story with a s#x scene with a dog to a journalist to publish…… she claims it never happened and was just a movie….

Just yesterday she included the name of Journalist whom she say connived with Halima because he was her boyfriend then…..The Journalist replied her posting a scene from the alleged s#x scene and promised to deal with her but her fans went into attack mode after watching the video …They claim Cossy was fully clothed and it was just a movie…..

The journalist, Tunde Moshood replied that since she wanted to bring up the dead issues she should be ready to face the consequences.

Ordinarily, I would have kept mute with all the name callings but having to drag my innocent daughter was going to the crescendo.

The trouble with most of us is that we would rather be ruined by praise than be saved by criticism. Those pushing you, won’t be able to help you by the time I finish with you.This story has come and gone but he who the gods will kill, they first make mad.

Sticking to good habits can be hard work, and mistakes are part of the process. Don’t declare failure simply because you messed up or because you’re having trouble reaching your goals. Instead, use your mistakes as opportunities to grow stronger and become better. Now Cossy Orjiakor, this challenge is for you, where was this movie shot, where was it released. Who was the producer, who was the director, who were your cast and crew”.
#cossychallenge
After the release of the video, Cossy’s fans came called out the journalist because the video only proved it was a movie. 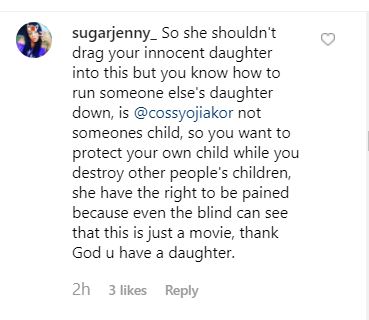 It Was A PR Stunt – Actress Angela Okorie Denies Getting Married

Our hearts are bleeding, Buhari has failed Nigerians – Catholic Bishops

It Was A PR Stunt – Actress Angela Okorie Denies Getting...

ABOUT US
I'm Jane Francis, a graduate of University of Ibadan (UI) with BSc in Economics and MSc in Economics from the University of Lagos (UNILAG). I'm quite passionate about Information Technology at large which has made me equip myself with the knowledge of Digital Marketing Media, Customer Services and quite a number of IT specialties. My number one goal in life is to reach-out to people with every online platform i can lay my hands on. And Of-course!! I LOVE TO GIST. :)
Contact us: [email protected]
FOLLOW US
© 2020. JaneFBlog. All Rights Reserved.
MORE STORIES

Our hearts are bleeding, Buhari has failed Nigerians – Catholic Bishops

It Was A PR Stunt – Actress Angela Okorie Denies Getting...

jane - August 12, 2020
0
We use cookies to ensure that we give you the best experience on our website. If you continue to use this site we will assume that you are happy with it.Ok